I recently finished a redesign project, and there were some interesting challenges that came up that I thought I would write about.

To start off, there were the menus.  The site has an obligatory drop-down menu at the top, and a similarly styled menu on the left.  Here's a look at the drop-down menu: 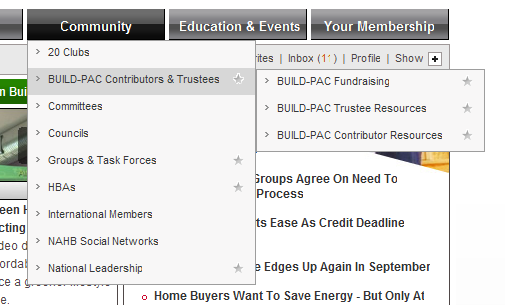 As you can see the items in the menu have a little caret on the left, they turn a darker gray on mouseover, and certain items (members-only ones) have a special star icon on the right.  There are also submenus with the same style.  I'm not going to talk about the specific javascript implementation that I used for the drop-down (I used a slightly modified version of the jQuery plugin jdMenu to get it done -- http://jdsharp.us/jQuery/plugins/jdMenu/), but will instead address how the styles are implemented, which was a bit trickier than you might think.

The html for the menu is a simple nested unordered list:

Nice and clean and accessible.  But the style has to be pixel perfect too, of course.

When I got the menu from the designer, the caret and the star were implemented with a single background image.  That made sense to some extent.  You can only have one background image per element.  And I can't use the <li> for one of the background images because the only elements that supports the hover is the <a> tag.  And I needed to use the a:hover css selector to make the items turn dark gray on mouseover.

Fine.  But that really makes things a bit complicated and inflexible.  What if I need to adjust the width of the menus (which did indeed happen several times during the redesign)?  I would then need to recreate those background images with the correct width.  I know just enough Photoshop to do that kind of thing, but it's really annoying.

Finally it occurred to me that there's really no reason that the <a> tag is the only one that can do a hover.  With javascript, I could capture the hover for any element.  What is more, jQuery made this very easy to do.  I added this to my page:

(Okay that bit of code applied to my left navigation menu.  jdMenu actually took care of this for my top nav by adding a "jdm_hover" class.)